On “Merit,” Processes, and Faculty Governance

The Iron Law of Meritocracy states that eventually the inequality produced by a meritocratic system will grow large enough to subvert the mechanism of mobility. Unequal outcomes make equal opportunity impossible. The Principle of Difference will come to overwhelm the Principle of Mobility. Those who are able to climb up the ladder will find ways to pull it up after them, or to selectively lower it down to allow their friends, allies, and kin to scramble up. In other words: “Whoever says meritocracy says oligarchy”—from Twilight of the Elites: America After Meritocracy (Chris Hayes)

My favorite non-fiction book of 2012 was Twilight of the Elites. I liked it enough to brave the crowds at the Brooklyn Book Festival to see Hayes talk about it with a few other people. When I read Hard Times with my students, I urged/begged/challenged them to spend time thinking about the second chapter (“Meritocracy and its Discontents”). Just my summary of the chapter got them all worked up. Its arguments come to mind on a fairly regular basis (it’s too soon to know yet, but it might eventually rival The Alchemy of Race and Rights in the space it occupies in my brain), so when I tweeted this last week: 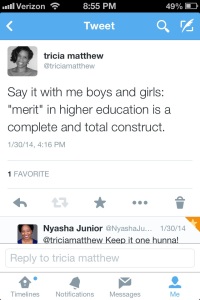 I had it in mind.  And I had it in mind when I read“The Tenure Code” a post about a tenure case that fell apart because the word “solid” was used by an external reviewer to describe the candidate’s scholarship.  Written by the ultimate insider, a 20-year veteran of an elite private school, the post both discusses and exemplifies the problems with twenty-first century notions of merit and shows just how absurd and arbitrary the tenure process, steeped as it is in the hocus pocus of meritocratic fantasy, can be. Ilan Stavans uses this tenure case to point out what is wrong with the process at Amherst College, and I would posit that what ails Amherst trickles down on the rest of us.

I’m particularly interested in a few claims Stavans makes.
He describes the campus committee (the C6) that reviews tenure files:

To be elected to the C6 they must have spent about a decade making themselves known in the community, which in turn makes them electable. By this time, the demands for tenure have changed from when they went for tenure. So they often demand of a candidate’s record more—much more—than their own records are able to display. This means that by their own implausible standards they wouldn’t receive tenure themselves.

Let’s pause for a minute to unpack this. It takes about ten years to build the credibility required for election to the committee. On the one hand, this could be a positive. Having a sense of an institution’s history and goals and a stake in its success is why tenure and faculty governance should matter. But the problem is that too many academics seek only to affirm their own experiences and ideas rather than judging the file in front of them. Stavan quips “Everyone knows the formula: Academics + power = mendacity” and he’s right, but what I want to understand is how this formula stays in place.

I know how it was put in place. Those who devise the systems of evaluation in higher education are suspicious of their own notions of merit and so develop ever-absurd hoops for faculty to jump through. And jump you must. There’s no use wringing your hands or shaking your fists at the system. You can, but they’ll fire you and fill your place with an equally qualified adjunct,and then with a visiting assistant professor in a position that might eventually turn into a tenure-track position that will lead to a national search where there is little or no chance of the adjunct or the visiting assistant professor making the shortlist.  Fighting pre-tenure is not a plan.  But there are those who can fix.  They have power.

By “they” I ultimately mean the upper administration, but it’s also those committees like the C6 at Amherst. This is a committee comprised of tenured faculty from different disciplines who have no real understanding of fields outside of their own. The tenure track pushes new professors to hew to a fixed path, so part of being successful is not just maintaining an active research agenda but maintaining one approved by the institution. Straying from that can lead to problems and the strategy developed to gain tenure too often solidifies into practice.”Academic freedom” becomes a banner to fly to protect speech and ideas instead of as a tool to dismantle unfair review processes.

In theory, the review process is supposed to protect a file from the benign ignorance of a committee like the C6 and external letters are a key part of that process, but as Stavans explains they can be used in ways their writers never intended, especially at places with an odd sense of what excellent looks like:

Exceptionalism at Amherst is such that the C6 expects—and the college community expects the C6 to expect—outside reviewers to use only exceptional language in tenure letters. If a candidate isn’t “superb,” “extraordinary,” “unparalleled,” “remarkable,” and “at the top of her field,” then the assessment is coded with mediocrity: Good isn’t good enough.

Even when exceptionalism isn’t the goal, tenure files can be torpedoed by poorly worded letters.

I shudder to think about what happens when the candidate works in a marginalized field that might not be taken seriously by her own department never mind a campus-wide committee like the C6.  And, if you’re thinking, “well clearly we need to put some people of color on the C6 committee, Tricia” I would answer that those committees need more than “some” people of color—more specifically they need people of color who have managed to gain institutional credibility–the kind that comes not just with tenure but with tenure in departments that have a firm footholds at their colleges and universities. So when UT Austin fires faculty working in ethnic studies, and UCLA has a program instead of a department of Afro-American Studies and Princeton offers certificates but not degrees in African Studies, Latino Studies, Latin American Studies, South Asian Studies** it is difficult and perhaps even impossible to build a coalition of faculty who have the credibility to make substantive contributions to personnel processes.

External letters are supposed to be part of a tenure file, but being a scholar in ethnic studies means that the pool for external reviewers (faculty who are senior enough to have credibility with the candidate’s home institution) is not particularly deep and everyone in it that pool is overworked. I suspect many of them are doing the work of building majors, programs, and departments in fields that are largely undervalued. I would be curious to know how their request for external review stacks up with Stavans’
He writes.

Personally, I get an average of between six and eight tenure-evaluation requests a semester. Such is the volume, let alone my other commitments, that I regularly decline, often to all, unless the candidate is a former student of mine.

12 to 16 is a lot, so managing the flow is required, but I am particularly interested in who gets a yes from him, specifically his academic kin. To use Hayes as a hammer, perhaps more bluntly than he might want me to, even as Stavan is critiquing a system he is perpetuating it by only helping out his own.  And who can blame him? He is right when he discusses the amount of work that goes into these reviews, though I’m hearing that letters from former professors are falling out of favor (I suspect that what happens is that external reviewers engage in some sort of you-write-about-my student/friend/ally-and-I’ll-write-about-yours).

Near the end, he explains one strategy he and others use in the face of some requests for review letters:

I’m told that in some institutions, declining such invitations amounts to a rejection ending up in the candidate’s files. For that reason, I do what I most dislike but others have suggested as the pertinent approach: I don’t respond.

The reason I decided to title the anthology written/unwritten is precisely because of these silences, the gap between what is said explicitly and what is deliberately left unsaid, those unwritten moments that may speak more than anyone intends. In this case, silence does not mean lack of support for a candidate’s work but lack of time to support a specific candidate (or perhaps it means both things at once). The unwritten goes beyond damning with faint praise.  And when what is written includes words like “solid” in a place where everyone  is exceptional and, (even though this is actually impossible), everyoneis above average there is no room for even the mythology of merit.

**To be fair to Princeton, they offer a lot of certificates in fields that some might find surprising. It’s also worth noting that, at some point, someone thought it odd that Princeton is the only Ivy League University that doesn’t offer a bachelor’s degree in African-American studies

One response to “On “Merit,” Processes, and Faculty Governance”

feminism, race, and culture in the twenty-first century

Notes on a Theory...